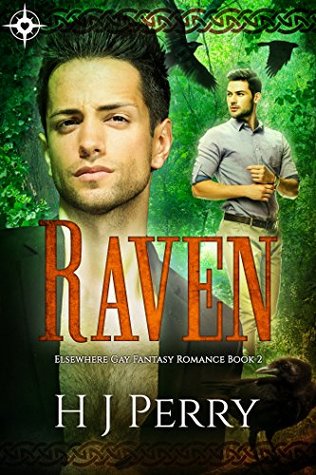 Cover Art: Two men who seem to be badly photoshopped against a forest green background with a Celtic border top and bottom which is completely lost. The image of a bird can just be made out in the bottom right of the cover. The title is clear in a brown colour, however the subtitle is too small and lost. The author’s name appears in white. This cover is far too busy.

Synopsis: Sets the scene for the story. The synopsis is slightly different inside the front cover of the book. Authors should remember to have their synopses checked for errors. Punctuation is either missing or incorrect in both versions. States it is a steamy gay fantasy romance however, warning of sexually explicit content only appears inside the book itself.

Main Characters: Caspian, a bookworm who just wants to find a peaceful place to read. A raven and a man who appears in Caspian’s dreams.

Writing Style: Why did the author feel the need to write inside the cover ‘Written in American English’? Yes we can see it is written in English, and can see the spellings are American, however the phrasing is still very English.

This appears in the author’s bio – HJ Perry lives by the English seaside BUT is learning to accept having words translated into American for an international audience. –  American English is not a foreign language, it is still a form of English and does not need translation. Her readers are not stupid. Stop insulting their intelligence. Take a look through the print books in any British bookshop and you will find, without exception, there are no American spellings so why change for ebooks?

Editing/Formatting: Editing is poor in this review edition. Plenty of typos and grocers’ apostrophes. The text is formatted neatly.

Conclusion: Am I missing something here? Apart from the book containing sex scenes, which are pretty basic, I think you would like this story if you were about twelve. I thought the story was puerile and immature. As you can no doubt tell I did not like much about this book and if I was not reading it for review it would have gone in with my DNFs

I give this 3* out of 10 and I consider that to be generous.