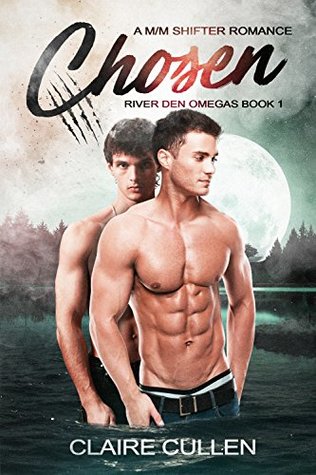 Cover Art:  Set on a moonlit river with trees in the background, two young men are standing in the river, jeans on.  The fact that they are in the river with clothes on doesn’t bother me as much as the posed stance the two men are in.  They would not stand and pose in the river like that, it’s way too unnatural.  That aside, I adore the fact that the men are younger and that fact suits our main characters.  (They are really young).  The book title is in script with claw marks striking through the C in Chosen.  The rest of the wording is in bold, capitalized font and is easily legible.  The cover also clearly states that this is book one, letting the reader know that this is the start of a series.  Other than the weird pose, this is a good cover, and I have to say again I love the chosen models.

Synopsis: The synopsis is brief and does the job of getting the point of the story out there.  To be honest, I saw a new Claire Cullen novel and said heck yeah!  I mean, shifters, omegas, and mpreg. And then, I read the synopsis.  The first sentence grabbed me and pulled me in.  The author is creating a new universe if you will, and I am excited to go along for the ride.

At such a young age, our primary characters seem to have to take the world on their shoulders.  Hunter just wants to work on his uncontrolled anger issues; not choose a mate.  His innate kindness is readily apparent even when the two first meet.  Cade just wants to go home, but he was captured and abused when he would not accept a mate he did not choose.  He is good at playing the cocky, smart mouth omega but it is easy to see that is not his real personality.  The two are thrown together out of need, not desire.  The emotions are well written; there is no Instalove here.  Just two young men at the mercy of others finding a common goal – to go their separate ways.

Ugh, Elena! The crazy villainess. I love how she is written.  She plays a small part in the story but does it with style.  Seth, Hunter’s cousin seems to play a significant role as a secondary character in this book.  He is a steady support to Hunter and seems a pretty good bet he will have his own book soon.   Then there is Joe.  Sweet Joe, who wants what he just can’t have.  I cannot wait to see more of his character.

Plot:  Simple, but not.  Can two young men who are forced together live their lives on their own terms, ignoring the forced mating?  Will Cade be able to escape as planned?  There are many kinks in their plans to go their separate ways.

Flow/Continuity:  The flow is a little slow for me, but only because this is a new world the author is building.  I think we got partway there.  At the beginning of the book we go straight into Hunter and Cade’s issues, but there is not a lot of detail about Moonrise Cove or the other packs.  How the packs live, how they sustain their packs, what the town looks like.  How all the packs interact outside of the Gatherings.  How a mating works.   Once we get to River Den, some details start emerging a little more.  We are told about technology, windmills, and farms, but I think we need to see it.

Conflict and Climax:  The rising action and climax were well written and entertaining.  The falling action is where I fell in love with Hunter and Cade.  And babies!

Writing Style:  The story is written in third person.

Editing:  I found no editing issues.

Formatting:  The book was well formatted and visually easy on my older eyes.  Chapters are titled just fine.  There are no visual indicators to show that the scenes change but there is a double space between changes, and I was never taken unaware.

Conclusion:  I have questions, so many questions!  Because the author can’t give everything away, I will just have to wait for the next in the series, lol.  I really like this new take on a shifter universe, where the packs are slowly dying.  They have lost the ability to shift, to be their true natures, and no one knows why.  When Hunter and Cade reach River Den, it is like a window to a magical world opened to Hunter, and us.  I am really looking forward to seeing more of the River Den and all of its inhabitants in this great start to a new shifter world.