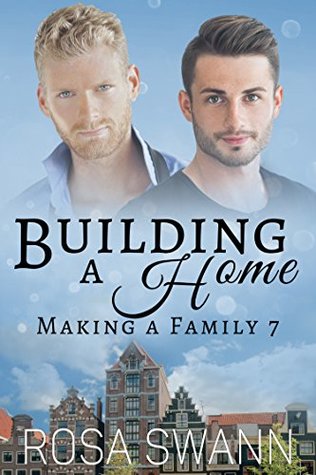 Cover Art: I don’t like the cover on this book. I liked it when it was the first book, but it’s grown rather stale on me. The two men on the cover don’t even look at each other. They have kind of blank stares. This is supposed to be a series featuring male pregnancy, but the baby is missing. The artist did not think that putting a baby was important but it’s a major part of the story.

Main Characters:  The main characters are Clay and Aiden. They are an omega and alpha pair, who met at a wedding and are currently raising Aiden’s sister’s son. The relationship between the two men has grown by leaps and bounds since the first book in the series. They are now juggling a toddler, upcoming baby, and houseful of relatives.

Plot: it’s rather straightforward. Clay and Aiden are attempting to settle into their home as a couple, but they run into roadblocks along the way.

Conflict/Climax: I don’t think there really is a conflict or climax in this episode of the series. Personally, I think the characters are still dealing with the conflict that happened in the previous episode. Nothing has really been settled. I didn’t like that because it felt as though the author was letting one of the characters down.

Flow/Continuity: I don’t think there’s any problem with either flow or continuity. The story easily goes from episode six to episode seven. I think that the author is good at making sure that the characters remain basically the same from episode to episode, keeping them on the series’ timeline. This episode does not have as much romance between Aiden and Clay, but it does have sweet little moments between them mixed in with every crazy event. The sex is well-written but in my opinion, it was too brief.

Conclusion:  This wasn’t my favorite episode of the series but it still was a decent read. I liked reading the dialogue for the family gathering scene. I think the author was great at expressing the various characters’ emotions. This wasn’t my favorite episode of the series because it seemed like it was only filler and there wasn’t really any romance between the main characters. The sex was well-written but there wasn’t enough of it, after all the characters were newlyweds so the reader is given to expect more romance and passion between the two. I still want to see what happens to these characters in the next episode, this episode has left me hanging as a reader.

For all these reasons, I give this episode 7 out of 10 stars.