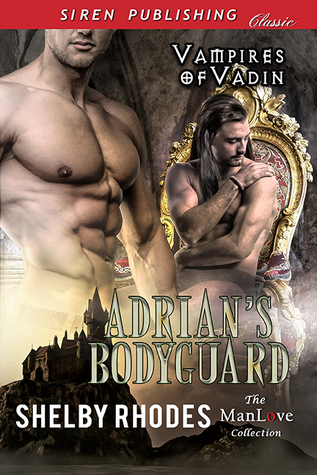 Cover Art:  The details on the cover look to be in a time of the story. However, it looks like another paste job. The castle at the bottom left corner is the best part of the cover. It is easy to read the book title and the Author’s name. The cover does not do its contents justice.

Plot: With the King being attacked on a regular basis throughout thousands of years, he is awarded a bodyguard. Then the excitement begins. He does not want or need Xavier as a bodyguard, until he realizes that he does need Xavier.

Xavier- bodyguard to the Vampire King

There are not many secondary characters but they are necessary to complete the chain of events.

Flow/Continuity: It is an easy story to follow and no clarification needed on events.

Editing/Formatting: There were no noticeable typos.

Priced:  Comparable to most new releases and worth the money.

Conclusion:  There is action, tragedy, passion and a little camaraderie. I lost track of time and the fact I was reading it to review. While it is a series it did not feel like a cliffhanger but you definitely want to know what happens next.

Adrian’s Diary – Twelve Days of Seduction was released on 25 December, 2017 on Shelby Rhodes Facebook page. To be read after Adrian’s Bodyguard.

The cover for Adrian’s Diary is the classic look of leather with gold leaf designs on corners, as with the title in a beautiful cursive and Author’s name in print. The pages are equally beautiful. The Diary is a diary and to say it is funny is an understatement. My husband looked confused when I burst out laughing. Adding the Diary and his shenanigans was brilliant.   10 out of 10.

Upcoming: Stephan’s Monster   Vampires of Vadin 2  is to be released in 4-5 weeks. Watch for the review.

Vampire King Adrian Bloodhart has faced many challenges in the thousands of years he’s been reigning. However, he had thought he’d moved past the stage of his life that was littered with assassination attempts. And, as if the attacks weren’t irritating enough, he finds himself saddled with a personal bodyguard he doesn’t feel he needs or even wants.

When Xavier Dayden had agreed to guard King Adrian, he had expected to be guarding a mature adult, but what he got was a petulant child. Adrian is odd as hell and too sexy for Xavier’s peace of mind. When Xavier finds his control slipping, he’s conflicted. Giving in could lead to so much more than a one night stand, but was it worth the possible heartbreak?

The choice is made when tragedy strikes where it is least expected and, as Adrian’s walls crack and fall, Xavier is there to pick up the pieces. Through the heartache, love is finally in their grasps.

Books have always been a big part of Shelby Rhodes’ life. Unfortunately, growing up writing had been a constant struggle for her. So, even with her head filled with stories she never tried to write them down.

It took two degrees in painting, one a master’s degree, for her to finally gain the confidence to explore writing as a creative outlet. Now writing has become a way for her to dive into new adventures and explore new worlds.

With confidence she fully intends to explore everything that has been stuck in her head for years. It is her hope that others will join her on her adventures.