The Officer’s Siren Review ~ Beginning of a seemingly interesting series … 7 out of 10! 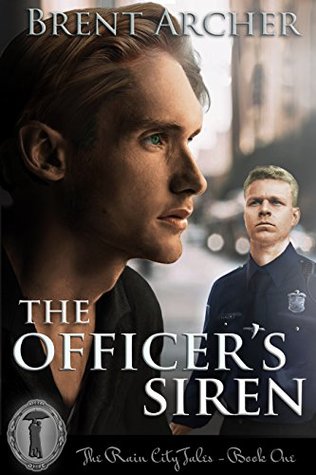 Cover Art: A serious looking, young, blond-haired, blue-eyed man in profile looking across the cover with a police officer looking out from the background of a street scene. The title and author’s name appear in white in a good clear upper case font. The series title appears across the bottom of the cover in script. The cover fits the story well.

Synopsis: Sets the scene of what looks to be a heart-stopping, dramatic love story but it gives away three quarters of the story. Although the book appears in the erotica section on Amazon, there is no specific warning of adult content.

Plot: Mike Bryant meets the man of his dreams when his truck is stolen and Jason Lynch is the police officer who responds to his call. Jason is also dealing with the death of his lover Christoph four years previously. When Jason is nearly killed in an incident he confronts his feelings for his young lover and makes a decision about their future. Then Mike is attacked by two drug addicts and Jason is the one who finds him.

Main Characters: Mike Bryant, works in a hotel on the front desk at night, while saving to go to college.  Jason Lynch, is the police officer who responds to Mike’s call regarding his missing truck.

Secondary Characters: Alan is Mike’s cousin who took in Mike when his mother disowned him after he came out. Craig is his husband.  Emily Sanders is a friend of Jason who had introduced him to his partner Christoph who died four years previously. They contribute enormously to the story along with Mike’s mother who is there niggling away in the background.

Flow/Continuity: The story flows well from scene to scene, changes during chapters are marked. I think the final couple of chapters should have the passing of time marked as I had to read back over to understand completely that there was a gap.

Conflict & Climax: Jason and Mike’s relationship is not straightforward. Mike has to deal with the occasional flak from his mother and both suffer from the aftereffects of their own personal crises. At the end all the separate strings of the story are brought together to tie neatly

Writing Style: Written in the third person, the author has an easy flowing style and shows a knowledge of his topic. Sex scenes are well written and enhance rather than overpower the story.

Editing/Formatting: Quite a number of minor typos appear throughout this review copy which really should have been corrected by this time. These have been passed on but the author should consider using a proof-reader in the future. Formatting is tidy with clean margins and no superfluous whitespace. Chapters begin on a new page and are clearly headed in a large bold font.

Price: At £4.49 for 238 pages, this is about average compared to other books of this length.

Conclusion: The beginning of what looks to be an interesting series with book two, Past Secrets Present Danger, due out on 16th January 2018.

Once the errors are corrected the book would deserve at least one more star on its rating.