A Royal Miracle Review ~ Intriguing twists and turns … 7 out of 10! 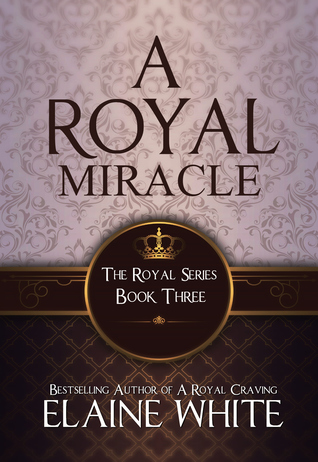 Cover Art:  The cover of the book appears to be a wall, with fancy scrollwork wallpaper, chair rail and darker wallpaper beneath the chair rail.  It speaks of wealth and opulence.  In the center of the cover is a circle containing a crown and the words “The Royal Series Book Three.” The cover is different from the first two books, but matches the theme well and ties it into the series.

Synopsis:  The synopsis does its job by letting us know this is Jaycob’s story, of his loneliness and meeting his “Silent Boy.”  It makes a slight mention of Jaycob’s abilities, but it does not tell us that this is a paranormal novel, that Jaycob is the beloved son of the Vampire King and his companion Spencer, who is also unique in his own way.  I feel that putting more details in would grab new readers interested in the paranormal genre.

Main Characters:  Our main characters are Jaycob and Averie, otherwise known as “Silent Boy.”  They are both outstanding and noble, and their attraction is immediate and profound.  As this is book three in the series, I already knew Jaycob, albeit as a child.  He is now full grown, a man with needs and desires, and I found myself hoping for him to realize his dream of a life mate.  The son of the Vampire King and his companion, he has unique abilities, some of which he shares with Averie.

Averie, also a magic user (warlock), is loyal, compassionate and has put himself in the position of caring for two younger boys.  While I found myself rooting for them, the only one I really connected with was Jaycob.

Secondary Characters:   Spencer and Prosper, Jaycob’s parents, are our most seen secondary characters.  While I loved Prosper in the first books, he acts out of character in this book, and that really threw me off.  I really didn’t like seeing his actions, and honestly, I didn’t like him very much.  I am not sure that this really added to the book.  This is a point where telling us versus showing us is crucial.  His behavior was out of character, but we had no insight into it.  I did like Spencer’s father’s bear attitude, his love for Jaycob never falters and is never in doubt.

Plot:  From pining for a true life mate to running from witch hunters, to advancing from witch to warlock, a lot is going on in this book, with plenty of twists and turns to draw in the reader.

Flow/Continuity:  The flow of the book was ok, but some of the more fantastical explanations (such as transferring vampire powers) pulled me out of the story a bit.

Conflict and Climax:  The author has a vivid imagination indeed, and she shows us through the many twists and turns on the way to the climax.

Writing Style:  The book is written in an alternating, third person point of view.

Editing/Formatting:  No editing errors were noted. Formatting was well done, chapters are labeled with the number, the point of view and sometimes a date.  Internal conversations between Spencer who is deaf and Jaycob, who can converse with his father in his mind, were italicized to stand out.

Conclusion:   I have been intrigued by Jaycob since his birth, and I really love his kind, compassionate nature.  Averie suits Jaycob well.  A few things really bothered me though, that center on the author telling, instead of showing.  Also, Prosper’s actions really hit home, the way they made Jaycob feel.  The fact that it was so out of touch with his character and not gaining Prosper’s perspective before the confrontation really caught me unaware.  We have our happy ending though; true love does conquer all.