The Sangre Brotherhood – Book One 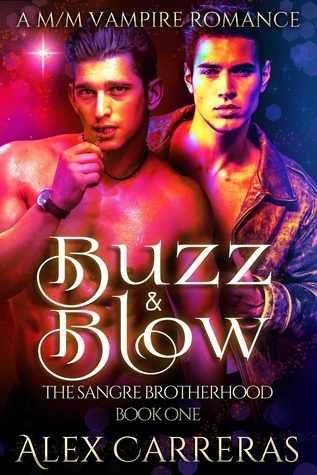 Cover Art: A techno color look unlike many on today’s market. The two males look like they fit together. The title, subtitle, and author name are easy to read.

Synopsis: The blurb gives a sneak peek into the content, however it does not currently have a warning of adult content.

Plot: Barber and stylist vamps on the cutting edge of danger, band together against the thing that would destroy Sangre and their way of life. Hot relationships form amid the threat of danger.

Asher Riots – Works at Everlasting salon as a stylist, and an old friend of Jerrod.

Tory – Twink and stylist at Everlasting, has a love for bedazzled bling.

Mario Torres – Niko’s cousin who has a penchant for finding trouble.

There are several characters who make an appearance, who will be in the next books in the series.

Flow/Continuity: The story takes you to Sangre to watch the action as it unfolds. The intimate scenes fit into the story. It does not feel like a cliffhanger but you know there is more to come.

Conflict & Climax: There are some friendships centuries old, as well as newly formed bonds. There is a brotherhood here who know what the term means.

Editing/Formatting: There weren’t any typos which would distract from the storyline. There were bold chapter headings to distinguish the chapters.

Priced: This series is being re-released following the story being added to and re-edited. The sale price will be low, the introductory price is affordable for most anyone who enjoys a great series.

Conclusion: The story takes place in Sangre, Florida and it is a M/M Vampire romance. This story has something for everyone. Extremely hot, sexy vamps who like to love as well as fight for their friends and family. This story will make you laugh at their antics and read it again to see if you missed anything.