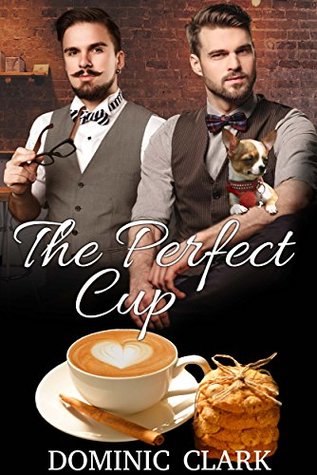 Cover Art: Two men are placed next to each other. They are nicely dressed with one of them holding a dog. I like this cover because I think that it relates directly to the story. In addition to the men and the dog, the artist included a coffee cup and baked goods. I liked how the cover ties into the story.

Main Characters: Brad, works at a Cheese Manufacturing Plant but has recently lost his health insurance

Zach, Brad’s best friend and owner of a coffee shop and a cute little dog

I liked these characters because they were fun to read and had great chemistry. Brad and Zach were best friends, who loved each other. They were opposites on the surface. Brad was supposedly straight, and Zach was openly gay..

Secondary Characters: The author made them funny. My favorites were Maude and the professor. I liked their dialogue. They were hilarious.

Writing Style:  This story is told in alternate first-person narrative.

Plot: This is a marriage of convenience and a first-time gay story. It is straightforward and uncomplicated.

Flow/Continuity:  I liked the flow of this story. It is very smooth. It has a great mix of humor and sexual tension. I think that the intimate scenes between Brad and Zach are good, but are just unbelievable. The sex is just too perfect for a first-time bottom.

Conflict/Climax:  I think that the story’s conflict comes from the main characters’ inability to be honest about their feelings for one another. The climax swept in the romance to the story.

Conclusion: I think that The Perfect Cup was an interesting read. I liked the main characters Zach and Brad because they had chemistry. The intimate scenes between the two men were okay but unrealistic.

For all these reasons, I give this story 7 out of ten stars!