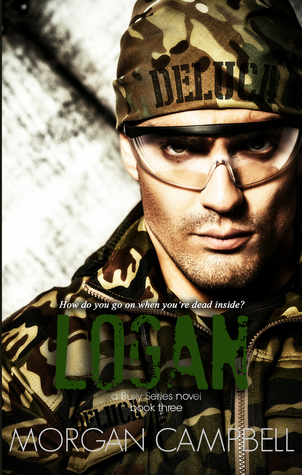 Cover Art: Shows head and shoulders of a serious man in combat dress looking outwards against a plain background. The title is in dark green with the author’s name in white underneath. The title is slightly hard to read but it fits with the theme.

Synopsis: Sets the scene perfectly from three points of view without giving too much away.

Plot: A serial killer is on the loose targeting the LGBTQ community and Logan and Cameron as part of their security organisation join the FBI and other teams faced with the search to bring him to justice.

Cameron – a doctor dating Josh also works with Logan and JoJo. He and Brad first saw and fell for Logan at the same time but Brad was quicker on his feet and got in first.

The Judge – a serial killer who believes he is sent from God to rid the world of the LGBTQ community and targets nightclubs and other places where they hang out.

JoJo – Partner of the security firm with Logan and Josh. He also narrates a couple of chapters.

Flow/Continuity: This flows seamlessly and flawlessly from one scene to the next in this thriller. There are no plot holes or continuity errors.

Conflict & Climax: There are two stories in one here. The hunt to bring The Judge to justice and Cameron and Logan’s relationship which is always going to be difficult because of their conflicted feelings for each other.

Writing Style: Written in the first person from the perspectives of Cameron, Logan, JoJo and, The Judge. Each chapter is headed with the name of the character narrating the story and character changes mid-chapter are marked.

Editing/Formatting: Well edited, very few errors in this review copy which will have been edited out by release day. The pages have a tidy look with neat margins,  each chapter is clearly headed and begins on a clean page.

Price: Very reasonable for the length of the book.

Conclusion: This is a good example of great writing. The story has everything, passion, sorrow, Hurt and anger, happiness and an absolutely thrilling synopsis and finale.