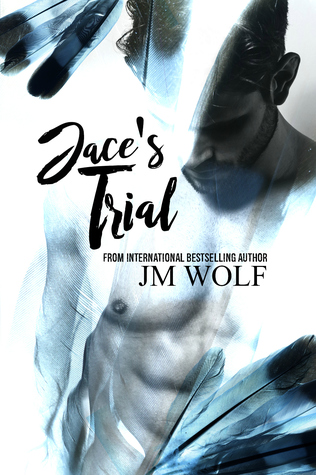 Cover Art: Shows a shirtless, bearded man, behind a semi-transparent curtain of feathers done in blue, black and white. Book title is in black script with series title and author’s name in upper case plain font. It fits with the storyline.

Synopsis: Outlines the background to the story and what we can expect without giving too much away. There are trigger warnings of physical and mental abuse, grieving and bottled emotions but there are no warnings of adult only scenes.

Plot: A young man who has lost everything – his scholarship, his promising future and finally his father during a tour of duty – and is left devastated, unable to cope with his grief, a shell of his former self and has lost his ability to make music. His father’s former partner arrives for the memorial service a year after the event. He too is devastated by his loss. When the two meet something is triggered. Is it enough to enable them to recover? This is an incredibly emotive and moving story.

Main Characters: Jace Garrison – musical prodigy, about 25 years old and slowly working himself to death trying to wipe out his grief.

These two characters are so well described it was possible to build an accurate picture of them.

Secondary Characters: Desiree – Jace’s aunt who lives with him; Malcolm – his boss at the bike rental store; Mrs Walker – his boss at the farmers’ market; Adam Love – successful pop star and Jace’s best friend. They all play their part in supporting the two main characters.

Riley Garrison also has a huge secondary part to play even though he was killed in action during a tour of duty.

Flow/Continuity: This book flows from scene to scene effortlessly alternating between the two main characters’ perspectives. No continuity errors were found.

Conflict & Climax: The conflict arises when Jace and Gerard meet. There is a spark between them which may just be as a result of their shared grief, but as it brings them closer together they are both conflicted because of Gerard’s relationship with Riley, Jace’s father.

Writing Style: Written in the first person, past tense, in a seemingly effortless flowing style. It is obvious the author has put his heart and soul into writing this story.

Editing/Formatting: Formatting has been very well done. Each chapter is headed up in a bold script font with a picture of a guitar. Scene changes are marked with a musical stave. A few errors were found in what was an ARC. The author was notified and all will have been fixed by release day.

Price: In line with others of the same length and worth every penny.

Conclusion: This is a beautifully written story based around grief, loss and love, which takes the reader on a roller-coaster journey as the two main characters try to rebuild their shattered lives. This seems extremely personal to the author and is one hell of a tearjerker. Tissues not supplied.