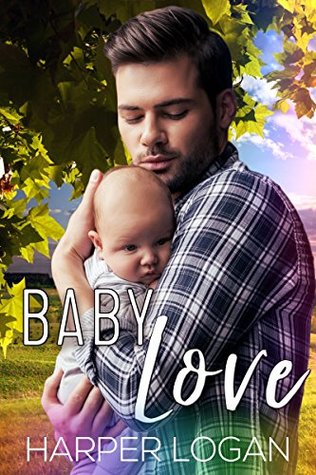 Cover Art: This is art well done. A man wearing a plaid shirt holds a baby. The baby looks out at the reader. The man has his eyes closed and loving expression on his face. The background is a natural one and the bottom part of the cover is rainbowed out. The text is written out in white, which works well for the color scheme. The font style is fun.

I liked Rafe and Marshall. They had chemistry right from the start of the story. The sexual tension was high between them. The sex between them was good and enjoyable to read.

Secondary Characters: I loved the way the author wrote the little toddler Abbey. I think that author is skilled at writing children. The minor adult characters were great supporting acts. They helped move the story along.

Plot: It is a simple straightforward storyline. Single father moves to a new town for a new job and romance follows.

Writing Style: I liked the writer’s narrative style. It alternated from Rafe to Marshall. It was done masterfully. I liked the dialogue a lot. The children’s dialogue actually sounded normal for a child and some authors do not have the knack for that.

Conflict/Climax: The major conflict that arises between the two men Rafe and Marshall, is the question of whether they should be in a relationship. I found myself frustrated with Rafe because he does not seem to think that he belongs in a relationship because no one can look out for Abbey like he can. There were parts of this story where I just wanted to spray him with cold water to wake him out of his stupidity. The conflict was resolved but I was not happy with how fast it was resolved, and everyone was happy again, with all the pain Marshall suffered because of the conflict, I felt Rafe deserved to feel some of it.

Editing/Formatting: I had no real problem with either the editing or format except for one. The chapters were not numbered, instead they were labeled with either Rafe or Marshall’s names. I found this rather confusing. I lost my place in the story several times.

Conclusion: I was attracted to this story by the beautiful cover and I went on to read the story, which I liked for all the reasons above, especially the characters and the sex.

For all these reasons, I award this story with an 8 out of ten stars!