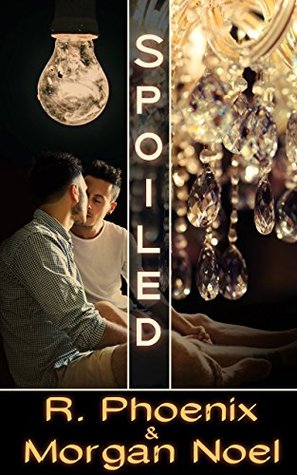 Cover art: The cover is a good representation of the story. It shows two men kissing, over them is a bare bulb while on the other half is a crystal chandelier. Representing the main characters backgrounds as rich and poor.

Synopsis: Good intro to story and characters while leaving aspects of the story to be discovered. There is mention of torture tactics and a theme of love between step siblings. If those are things that upset you the book may not be for you.

Plot: Kieran is a medic in a ragtag group of humans in a world ruled by supes (supernatural creatures). They capture Romulus, the lover of a man called The Butcher. Romulus is tortured for information that will help them fight back against the supes that threaten their lives. Romulus is the step brother of Kieran, a secret between them that no one in the group knows.

Main characters: Kieran is a medic in a group of humans in a world ruled by supes (supernatural creatures) who seek to dominate and kill humans. His group captures Romulus, the spoiled lover of The Butcher.

Kieran is a witch born without magic who was eclipsed by his step brother Romulus. Both raised in the same family but ended up with different paths and struggling in their own ways.

Secondary characters: Wren is the group leader, who is the voice of reason and Ram is the head enforcer who get information out of the prisoners. The Butcher/Boucher is Romulus’ lover.

Flow/Continuity: The story flowed well with no breaks that affected reading.

Conflict and Climax: Kieran’s internal conflict felt real. Concern for his brother but fear of revealing who he is, a witch without magic, to the group made for tense moments. When he finally followed his heart was when it got more intense. The climactic buildup was amazing and didn’t disappoint.

Editing/Formatting: There was no problems with editing or formatting.

Conclusion: This was a first for me, I had never read a step brother romance before and I enjoyed reading it.  This one seemed more relationship oriented. There were sex scenes but they weren’t the main focus. It was actually refreshing and enjoyable. While the world they lived in was dark and dangerous they found each other and something blossomed from it. There was mention of torture and bdsm so those aspects may be a turn off for some. The story is well written and while set in a pre-existing world there’s no cross over to confuse if you haven’t read R. Phoenix’s fate of the fallen series before. These two authors make a great writing team and I can’t wait to read more from them.