Omega Snow Storm Review ~ Good beginning to the series… 8 out of 10! 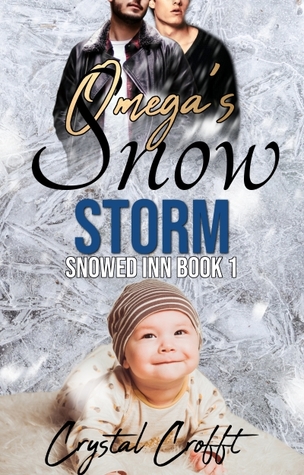 Cover Art: I liked it because the background is interesting. It looks like white ice. A cute baby is placed on the bottom portion of the cover. I think that it works well with the background. Even the two men with only cropped heads and torsos showing works for the cover. Although they seem to have been cut and pasted and not relating to one another. I liked the text fonts and coloring.

Main Characters: Peter and Luke meet at Peter’s family owned inn. Luke was staying there as a guest and Peter was working there as a staff member. They were total opposites coming from different worlds, but they had this spark. They have great chemistry and they enjoy a lot of sex throughout the story with each other.

Secondary Characters: Their role in the story is more on the sidelines. They are not really part of the main show.

Plot: I found it very straightforward. It was not complex. It was a simple boy meets boy.

Writing Style: I liked this story’s narrative. It was told in the third person. I liked how the scenes were very descriptive. The sex was well written and not a rushed job. I loved the dialogue.

Conflict/Climax: The conflict in this story revolves around family issues. The issues haunt the main characters throughout the story. I think the issues were not over dramatic. They were realistic and revolved around money and family relationships. I think that it was all resolved well by the end of the story.

Conclusion: I think that this story was a rather good beginning to the series. It was well written with highly descriptive scenes. The main characters were fully realistic. I enjoyed their romance and I think that the story was an interesting read.

For all these reasons, I give this story an 8 out of 10 stars!