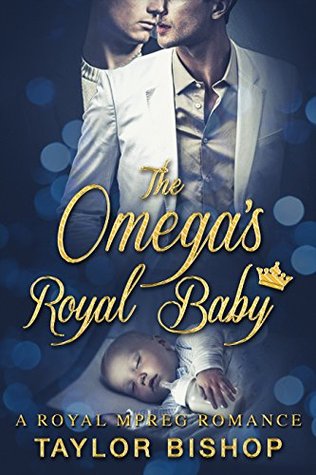 Cover Art: The baby at the bottom of the cover is precious. However, that cannot be said of the top portion of the cover. With the top being of two males, the heads are twisted in a position which looks like a kiss would be awkward. Plus my pet peeve, the tops of their heads are cut off. The font is in gold and looks like a royally classy font.

Synopsis: There is a description which would make one want to read the story. There is no warning of sexually explicit adult content.

Plot: Gabriel, the bad boy Crown Prince to the throne had too much to drink and a kind omega commoner, Noah took him to his home to sleep it off. The only way the Queen sees to resolve gossip is to move Noah to the palace and fake an engagement between Gabe and Noah. Tabloids have a field day as someone in the palace is leaking rumors on Gabe and Noah’s behalf.

Noah Miller – Commoner and an omega

Lucas – Nephew to the Queen, his Father was the King’s brother.

Nicholas – Lucas father who wanted the throne for Lucas

Secondary Characters: There are many secondary characters. Zara, PR for the royal family. Talk show hosts, Tracey, Hayden, and Cynthia. Federico, the tailor with a fun sense of humor. Arthur, the shop owner. They all tie the story together to make it fun and emotional.

Flow/Continuity: The story is easy to follow with each character’s interaction. The intimate scenes fit the story of young love. The details are wrapped up so it doesn’t feel like a cliffhanger, however, they were engaged and the story doesn’t go on to marriage.

Conflict & Climax: The author did a brilliant job outlining the strangers getting to know each other, describing them becoming friends and then much more. Noah finding out he was pregnant and Gabe’s reaction were awesome.

Editing/Formatting: The chapter headings were in a font easy to read. There were a couple of typos but they did not take away from the story.

Conclusion: This is a romance that feels genuine and caring. The way the feelings between them grow is realistic and appreciated in the way it is presented.

This is my first time reading this author and I would read her again.

Rating:  The story is one I would read again. However if I only saw the cover, I would not pick the book up, or select the ebook to give it a chance. Many readers want to know if there is graphic sexual content and I could not find a warning listed for this book.