Teaching Tenderness Review ~ Well thought story, but … 6 out of 10! 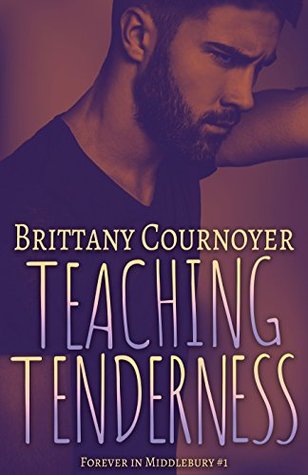 Cover Art: Nicely done with a deep maroon background, a thoughtful looking man with a tidily trimmed beard who is wearing a black V-neck T-shirt, looks down and off to the right side of the cover. His left arm is stretched out as if he is leaning up against a wall. He fits with my picture of Anthony, one of the main characters. Titling is in a gold-coloured font.

Synopsis: Introduces the story from each main character’s point of view then there is a summary in the third person. The warning about sex scenes comes complete with its own typo.

Plot: A single father meets his son’s teacher and realises that perhaps he isn’t as straight as he always thought he was. A teacher meets his pupil’s father and feels an instant attraction. We watch the pair dance around each other until they finally do something about it then follow their relationship through its ups and downs.

Main Characters: Marcus Anderson, Advertising Exec and single father to 12 year old Jackson who also plays an important part in the book so deserves a space as a main character. Marcus finds it hard to spend time with his son because of the pressures of his job. He and Jackson were abandoned by his ex-wife Rebecca three years previously.

Anthony Capriotti, Jackson’s teacher. He knows there is something wrong with Jackson but it is not until he begins tutoring him after school that he realises what it is. He finally meets Jackson’s father after Jackson is in trouble and wham! Instant attraction..

Secondary Characters: Sheila is Marcus’ secretary and protector. Cindi Capriotti is Anthony’s mother and giver of suffocating hugs. Rebecca, Marcus’  ex-wife and prize bitch makes an appearance and contributes to the storyline. Sebastian is Anthony’s ex and he appears several times. There are other characters who make minor contributions to the story.

Conflict & Climax: Anthony is concerned about how Marcus’ work colleagues will respond when he comes out. Rebecca, destroyer of manhoods and expert manipulator and prize bitch returns after being absent for three years. Marcus is concerned at the effects being with a man will have on his son.

Writing Style: Written in the first person with alternating chapters. Easy to follow whose perspective it is. The story is well thought out and put together, sex scenes are well written and not overly graphic but the story was somewhat spoilt by poor finishing.

Editing/Formatting: Formatting was tidy but the story was let down by poor editing. At this stage in the process, this review copy had far too many niggling typos (about 70 at final count) which rather pulled me out of the story. For example we had a description of ‘dark light brown hair’ which is it?, ‘those where the words’ instead of ‘were’, ‘wrapped his hands around my waste’ instead of ‘waist’, ‘tried to reign in my self-control’ instead of ‘rein’ and ‘he pulled off my sack’ instead of ‘sock’ which would have been extremely painful! Punctuation was not consistent. Sometimes commas would appear in lists and not in others. The author would do well to employ the services of a proof-reader.

Price: Reasonable for the length of story.

Conclusion: I had a real struggle to mark this book. I wanted to mark this as 9* out of 10 because it was a really enjoyable story but there were just way too many typos, as I said earlier so I have to deduct 2 points for those. The review copy with so many errors made for too many distractions during reading which loses another point. If I had bought any book and found this many errors it would have been returned for refund. Having ‘looked inside’ on Amazon it would appear the review copy is the version uploaded. This needs to be corrected ASAP.

What would probably have scored at 9*, has ended up being a disappointing 6* for the above reasons.