Series: And Then The Devil Cried – Episode One, Two, Three 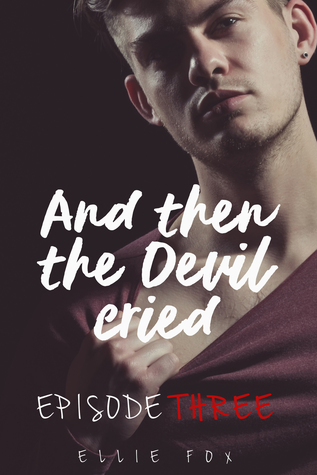 Cover Art: A young male with blond hair stylishly cut, determined eyes, full lips, a magnificent jaw line with a light stubble and a pierced left ear. He wears a deep red t-shirt pulled to the side to expose a brief glimpse of chest hair.

The title is in a white, bold cursive with Episode being in a thin font, book episode number is written in red letters. The author’s name at the bottom is in thin letters in white. The author’s name should be a little larger to be more easily read. However, I appreciate the title not being on the model’s face.

Synopsis: You are drawn in with just enough information to make you curious as to how the story will play out. I saw no warning of the story being sexually explicit or that it could be a trigger.

Plot: Book Three continues with Adam. Marcus has taken Adam from Rho, to do with as he wishes. He will break down every aspect of Adam to make him ‘his’. Rho tries to build Adam up with love and affection, while many other mob bosses are trying to make him into what they want. A whore.

As this is a serial with cliffhanger endings in each episode, the books need to be read in order.

Adam- Going from orphan to being wanted by many men for different reasons, it all comes down to Adam being property.

Rho- A thug and Marcus’ next in command, who was Adam’s first sexual encounter in all ways

Brandon- Loves Marcus and will do anything for him, even mess with Rho

Flow/Continuity: As this is a dark story where everyone wants to possess Adam in different ways, lots of sex is to be expected. This story ends as a cliffhanger, wanting to know what Rho will do to you know who.

Conflict & Climax: Rho finds this lost boy and takes him home. Sergei has been looking for him as he bought him from his mother. Marcus will have him because he can.

Editing/Formatting: The chapters are separated by who is telling their story. Headings also give the timeline for the story.

Priced: It is priced lower than many of today’s releases.

Conclusion: I like the darkness of the story. You can feel a storm building, crashing and destroying within Adam. The story has a distinct timeline and it is marked so you know where you are and who is talking.

As with the previous episodes, Episode Three leaves us a cliffhanger. I cannot wait to see what happens next and I know we won’t have long to wait.

And then the Devil cried -Episode One

And then the Devil cried: The boy and the beast – Episode Three

Rating:  A storyline inconsistency was distracting as I flipped back to see what was previously worded. Example: shot one in the foot. The next time it stated the one he shot in the leg. Also, a character broke his leg and was taken to the hospital. They took x-rays and confirmed the broken leg. They gave painkillers and anti-inflammatories and sent him home. I would think the broken leg would have to be cast.

My rating for this particular episode 7 out of 10 due to the errors mentioned, however, overall the series so far is a 9 out of 10

Cover art: All the covers fit the series, and wording is clearly readable. They all show a young man in a black and white photo, each one is a representative of a character.

Synopsis: Gets the reader up to speed with the characters while recapping past episodes, a good premise and helpful since it’s an ongoing series.

Plot: Adam is saved by Rho in episode one and later imprisoned by Marcus. The plot is Adam and Rho finding their way back to each other. There is a promised HEA but we aren’t there quite yet.

Main characters: Adam and Rho, though there are a few others who got their own chapters. Ian and Brandon’s roles are yet to be fully revealed. Adam and Rho’s relationship is the focus of the series, Rho is the tough guy mobster with a soft side and Adam didn’t stand a chance as his mother was involved in that life when he was born. Adam is a character who will tug at your heartstrings. He’s trying to fight his way through a world he’s trapped in while also fighting internal demons on how he’s surviving it.

Secondary characters: Ian and Brandon, both work for Marcus. Ian as a henchman and Brandon has his role too, but revealing that would be a plot spoiler to me. Marcus and Sergei are the main bad guys. Marcus is still having an effect due to what he did while alive and Sergei is next on the target list. He’s the one who is majorly affecting the plot.

Flow and continuity: This is an ongoing series. All the episodes flow together and pick up where the last left off, usually in a cliffy that leaves you impatiently waiting for more.

Conflict and Climax: Adam’s internal conflict drives the story. He’s doing what he has to do to survive and those things bother him. Rho isn’t giving him up and the struggle for them to get back to where they started makes this quite the page turner.

Editing and formatting: There was no editing or formatting issues. Chapters was clearly marked in heading and the index.

Conclusion: This was another great installment, definitely worth a binge read. Character driven storyline makes it hard to wait for new installments but they are worth it. There are mentions of past abuses and rapes in the series so be mindful of that when reading but if you like darker reads this is for you. There’s a promised HEA for the series.

I give this installment and series a 10 out of 10*

Ellie Fox is a writer of MM Fiction and loves torturing her characters. Self-proclaimed Harry Potter nerd, and purveyor of smutty fiction, her passions include reading everything from the classics, to literary fiction to genre works.

You can find more information about current and future projects by following me
https://www.goodreads.com/book/show/36462625-and-then-the-devil-cried
https://www.amazon.com/dp/B076P1HNRL
https://www.facebook.com/elliefoxfiction/