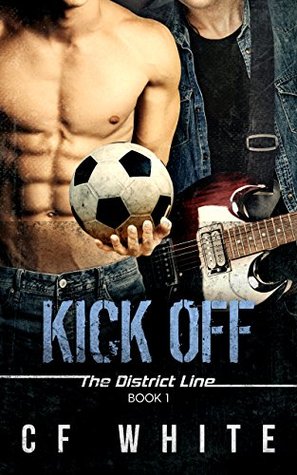 Cover Art: The cover shows two male torsos. The one on the left is shirtless and displays a sweet six pack while holding a football (soccer) in his left hand. His jeans are definitely low riders. The male on the right has on a black t-shirt, jean jacket and holds an electric guitar. The title letters are in varsity blue with a stencil fade, while the series title is smaller in white print. Author’s name is in bold white at the bottom edge of the cover.

Synopsis: It is stated right off that reader discretion is advised in capital, bold type. The author gives you a look at the main characters’ lives.

Plot: Jay was on the track to play professional football (soccer) until he messed up. He keeps his sexual orientation a secret from almost everyone. Sebastian is the rich boy who has no interest in his father’s plans. He would rather stay as lead singer and play guitar. They both have fears to face and choices to make regarding each other and life.

Sebastian- (Seb)- Front man for the Drops with his electric guitar, Wendy

There are many secondary characters needed for a full story, and they each play an important role.

Flow/Continuity: There are no breaks in the storyline. There are many sport metaphors used. The intimate scenes are continued throughout the book, making sense for a University story.

Conflict & Climax: A past lover of Seb causes friction, not in a good way, between Seb and Jay. Especially as he works for Seb’s father.

Editing/Formatting: Chapters are separated by chapter number and headings.

Priced: The price is comparable to new releases of most genres.

Conclusion: While the bodies on the cover are hot, I like to see if my imagination of the author’s description is portrayed by the cover. A cover without a face on the bodies will turn me away every time.

If you are not into college slang and sports, you may be lost in the conversation.

This is a re-release of The District Line. The story has been adapted with some character name changes.

Written as a standalone, however the story does continue through all three books in the series.