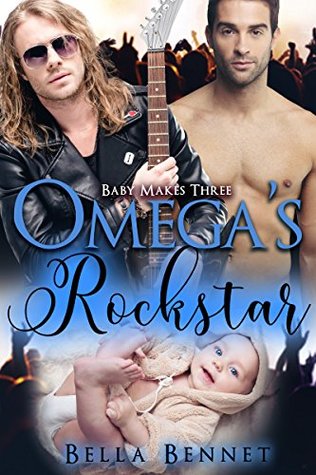 Cover Art: Goes well with the story showing the main characters. There’s the omega and the rockstar, backdrop is a crowd at a concert. The black and blue letters for the title and author name pops off the page. A very attractive cover.

Synopsis: Good intro to the story without too many details. It draws you into the story.

Plot: Mike goes for a mysterious job interview, that job turns out to be a sobriety companion to a rock star. Seth is a rock star who is fresh out of rehab and gets told he’s getting a sobriety companion, or as he calls it a nanny. Not that he wants or needs one. They work to keep it professional despite their attraction to one another. A well written plot with depth.

Main Characters: Seth,a rock star with a broken heart trying to get his music back. Mike who is a struggling omega working through a temp agency to get back on his feet after a break up. They meet when he gets hired to watch Seth.

Seth is the alpha who doesn’t need an omega and Mike is an omega who won’t depend on an alpha. Both have trust issues that they have to work through.

Secondary Characters: Penny is Mike’s somewhat scary protective sister and Gabby is the assistant who Seth hires. I liked Penny, she seems like someone who would be good to have on your side if you needed back up.

Flow/Continuity: Story flow was steady and there were no Continuity problems.

Editing and formatting: There were no editing or formatting issues that took the reader out of the story.

Conflict and Climax: The conflict of their attraction to each other in part drove the story forward. Seth fought it to avoid another heartbreak and Mike fought it to keep his job, but they couldn’t hold out forever. There are several scenes which could be the climax, when their attraction is discovered and all feelings come to light or after all the struggles to regain those feelings. Either way it was a roller coaster ride to the end.

Conclusion: After a slow build to the relationship it was a roller coaster ride to the finish, dotted with references to 80s movies and even a mention of another author in the book. My only issue was the number of chapters, until I realized that they were short chapters and I zoomed through them. Overall a pleasant read.