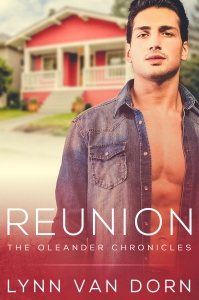 Cover Art: The background is a little pink house. In the foreground to the right is a dark haired male with a denim shirt unbuttoned. The title is in a large, white font and the author’s name is in a medium, white font and is easy to read.

Synopsis: The reader is given just enough information to peek at the characters. It is stated this book contains sexually explicit material. It does not state there may be an abuse or bullying triggers for some readers. However, at the end of the book there is an Afterword discussing domestic abuse, followed by the number for The National Domestic Violence Hotline 1-800-799-7233 http://www.thehotline.org/

Plot: The story takes place in Oleander, Florida. Brett and Tony are planning their future when something happens which changes their lives. Brett moves away and becomes a doctor while Tony becomes a handyman contractor in their home town. After Brett’s Mom breaks her hip, Brett returns to look after his Mom and finds her home needs a lot of work done. While Tony works on Brett’s mother’s home, there are other things that are in need of repair as well.

Between Maxie and his stunts, which readers will appreciate, to Betty and Armand strutting around town like they own it, which they kind of do, you will find laughter bubbling up.

Joanie Simmons- Linda’s neighbor and she knows everything that happens in this town when it happens;

Devon- A homophobe who is a cop, and a bully.

There are many more characters who make this a fun and intense story.

Flow/Continuity: Expect lots of sex. These guys are making up for lost time.

Conflict & Climax:  Brett and Tony have a stressed relationship, trying to figure out their feelings for the past and present. One of the highlights is actually Maxie and his righting some things very wrong about Oleander.

Editing/Formatting: Chapters are set up as a diary including the location at the time.

Priced:  Comparable to most new releases

Conclusion: I like the Dedication at the beginning and the Acknowledgement at the end.

There are a couple of times the story slows down, usually right before or after sex, but it picks back up easily enough.

This is a MM with a heartwarming storyline. While the subject of bullying and abuse are open for discussion, the intense moments are offset by hilarity.

Lynn Van Dorn was born in Ohio and left it for the wilds of Chicago in her reckless youth. She wanted to become a fairy princess when she grew up, but since there are few openings for that position, she makes do with being a writer.

In her spare time, she drinks entirely too much tea, snugs her cats, loves her husband and son, reads voraciously, and avoids housework. She loves to watch anime, travel, knit, bake cookies, and conjure up happy every afters for handsome men who have trouble getting there on their own.