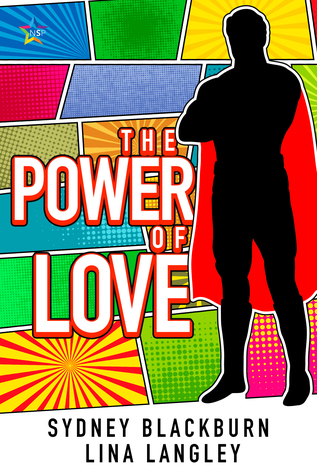 Cover Art: A silhouette of a man standing with legs apart and arms folded, set against a background of random coloured shapes and patterns. The title is in a large white upper case font, outlined in red and black to give a 3D effect, across the middle with the authors’ names in black across the bottom of the cover. Altogether makes a striking cover.

Synopsis: Short but sweet giving an outline of what to expect. There is no warning of any adult only content and the characters appear to be teenagers.

Plot: Basically a group of youngsters are sent to a training camp to hone their superpowers where two of them fall in love. However there is lots of puerile behaviour by the young men.

Main Characters: Vincent Silva, sent to superhero trainee camp where he shares a cabin with Locke, Cass Talbot and BJ Cockburn – pronounced Co-burn. Ariel is Vince’s best friend but is not in the same cabin.

Conflict & Climax: From the part I read, there was lots of bad behaviour by young boys trying to avoid being caught by their tutor Mister Mister.

Editing/Formatting: No editing issues in  the part I read and the formatting was neatly done. Chapters begin on a new page and are headed in a large bold font.

Price: Expensive for a book which seems to be aimed at the young adult market..

Conclusion: This is a young adult/teenager story and really not to my taste. No sooner does the story begin when the boys are drinking vodka and tequila getting drunk and behaving badly. Younger readers may enjoy it but really there are so many better books available on the market.

I find it really hard to rate this book at all but give it 2* because it has a nice cover and the authors can spell.

Cover Art: There are swatches of color reminiscent of The Partridge Family bus or Austin Powers with a caped silhouette of a male.

Synopsis: The authors included a warning of sexually explicit material. The blurb was probably the best thing about this book. There is sex, flirting and drinking among the teenage boys as is expected.

Plot: Male children of superheroes go to Camp Hologram for training. The females go to Camp Synergy, however they are mentioned but not participants in the story. The main character wants to be anything besides the son of a villain.

Vince- the son of the worst villain, Pied Piper

There are many secondary characters to try to make this a workable story.

Flow/Continuity: The beginning starts off so slowly that it’s hard to maintain interest. Around chapter 6 it starts to become interesting only to fall short of the mark.

Conflict & Climax: Different boys try to pair off for sex. Some work out, some have fun, some don’t happen. Sorry to say but the climax was toward the end of the book when it picked up for the ending.

Editing/Formatting: Chapter headings were in place.

Priced: Too high for this book considering the number of pages and that it appears to be aimed at young adults. It is not in KU.

Conclusion: I like comics and I understand superheroes are hard to write. It doesn’t feel like a superhero story; if so there was much lost in the translation. I found three parts of the whole book interesting, otherwise this was literally one of the most boring books I have ever read. I felt obligated to finish it. This was hard to rate due to its’ level of nonsense.

Rating: 3 out of 10   There was a warning given, a few good moments, and there was a good ending.