His Reclassified Omega Review ~ Good chemistry between characters… 7 out of 10! 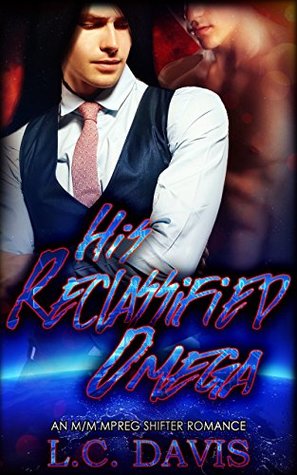 Cover Art: I liked the cover, but I thought it was rather strange for a few reasons. The men on the cover had the top part of their heads missing. I did not like the fact that their heads were shaded away. I don’t like how the title is hard to read because the font color is almost the same as the background color.

Main Characters: Myron and Charles are interesting characters. Neither man was comfortable with their roles in life. They begin the story with a working relationship but by the end, they are family. I liked them because they were passionate about each other.

Secondary Characters: I think that they were interesting and gave the main characters a reason to get closer.

Plot: I think that the storyline was truly unique for the m/m shifter genre. The romance part of the story was rather straightforward.

Writing Style: I liked the narrative. The story was told in alternating third person. Every chapter is told either from the perspective of Myron or Charles. I liked the way the narrative got inside the characters’ minds and emotions. I also liked the dialogue. I think that it was written decently. I liked the intimate scenes because they were very detailed. They were exciting not boring scenes. The passion flowed out of them.

Conflict/Climax: The conflict for the characters is, I think, between themselves and their society. Neither man feels like he belongs in his alpha or omega status. The whole conflict is dealt with excellently by the author.

Conclusion: I really liked this story. I found the characters interesting and I really felt the chemistry between them when I read His Reclassified Omega. I could not find anything to really dislike.

For all these reasons, I give this story a seven out of 10 stars!