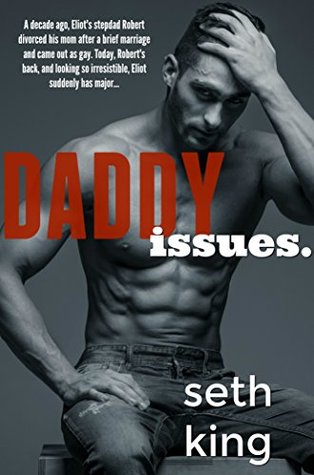 Cover Art: I don’t know who did the cover, but I like it. The cover model is smokin hot.

Synopsis: Fits the story well giving an outline of what to expect. There is no warning of adult content.

Plot: Eliot and Robert meet at a family funeral and are instantly smitten with each other. Eliot has taken his ex with him to the retreat. Robert was married to Eliot’s mother for a while. Things are complicated, at best. They share a few clandestined meetings before they finally decide they want to try having a relationship. Eliot’s ex finds out and confronts him about it. He leaves the family compound, but, hurt, he texts Eliot’s mother to fill her in on Eliot and Robert’s relationship. She takes a moment and ends up being okay-ish with it. There are a few moments towards the end that kick up an ugly cry, but the book ends with a HEA.

Flow/Continuity: The story is fast-paced, but flows very well.

Conflict & Climax: The main conflict is the “will they or won’t they” get together. After thinking it would end in a missed opportunity scenario, it is a HEA.

Writing Style: Present tense. POV of both main characters with a chapter from David’s POV and one from Mary Kate’s POV.

Editing/Formatting: Formatting was good. Only a few missing words as far as editing goes.

Conclusion: I found this story to be very well-written. It touches on a lot of struggles that gay men have to deal with in that part of the country and struggles in general. The story is a page-turner. Definitely a must-read.