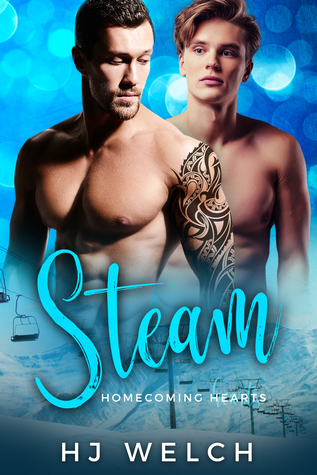 Cover Art: Shades of blue techno bubbles in the upper background with a ski lift at the bottom. The male at the front is dark-haired, tattoo hard body while the second male is younger looking and cute. Neither male is wearing a shirt. The title is in a paintstroke font with the author’s name in bold capitals.

Synopsis: The blurb gives a nice look into the story as it sounds interesting. There is not a warning of sexually explicit adult content.

Plot: Trent was a ladies man, screw them and leave them until he met Ashby. After some trouble, his manager made him go home for a few months. Trent and his Father need to repair their relationship since his Mother’s death. Ashby and his boyfriend broke up when Ashby saw he was being cheated on. The two men meet in Wyoming and get to know each other and despite orientations being what they are, Trent realizes things about his sexuality and himself.

Trent Charles (TJ)- An actor and ladies’ man who likes to drink and on occasion, fight.

Ashby Wilcott- A trust fund baby starting over after a breakup with his boyfriend.

Maeve- cleaner and confidante to Ashby

All of the staff at the ski lodge deserve a mention as they make this story richer.

Flow/Continuity: This is a full story with no breaks in the storyline. The intimate scenes are educational since it’s Trent’s first time with a male.

Conflict & Climax: There are issues between Trent and his Father which are realistic to life, hard to forgive. Ashby and Maeve’s relationship is great. Her boldness made me laugh out loud more than once.

Editing/Formatting: There are chapter headings and the headings are marked by who is telling their story.

Priced: It is very low priced for today’s market. I would purchase it at a higher price.

Conclusion: This is an interesting story as it has heartache, betrayal, sex, fun, laughter, and forgiveness. Plus a St. Bernard Puppy. Emotion packed and never boring. I will read this book again.