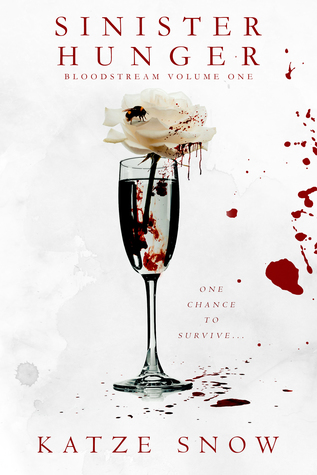 Cover art: A wine glass with water and a single white rose. A bee sits on the rose and blood is dripping off the petals on to the ground and into the water. There’s a splatter of blood on the right side of the cover as well. The writing is all in red. A very attractive cover and it fits the story well.

Synopsis: Good outline of the story. There is a warning for dark themes inside the book, but not on the Amazon or Goodreads pages. It would have been helpful to put one there too. This is the first volume of a serial but there is no warning of a cliffhanger ending. It would have been useful to add a note here.

Plot: Vincent is a Dusk Hunter. After an attack he is forced to go to Sanctuary City of Hope to save what’s left of his group. He volunteers to join Project Caine so they have a chance to live. Maddox is governor over the city and a vampire who happens to be Vincent’s new sponsor.

Well written and sucks you in from the beginning. The cliffy at the end is an excellent lead into the next book.

Main characters: Vincent Hudson is a Dusk Hunter. Along with his team he kills vampires who have taken over after natural disasters have devastated the earth.

Maddox Caine is the governor. He rules over Sanctuary City of Hope. He’s also the brains behind Project Caine, a sponsorship program that helps the citizens in City of Hope live in peace.

Secondary characters: Members of Vincent’s team, including his sister Violet and brother in law Abraham. Joseph is also on the team as well as Emory who is Vincent’s nephew. Bella and Noah are Vincent’s wife and son, they are raising Claire who is his niece.

Maddox has his generals. Myka Wolfe sticks out the most as he is behind the attack that led to Vincent’s team coming to Sanctuary. Titus is the villain and Svana is Maddox’ daughter. They play a part in the dark themes mentioned. Ezra and Asher are a part of Maddox’s team as well. Their parts aren’t full explained yet but they play a big part in the series.

Emory and Claire played a large part, Claire showed that Maddox had a soft spot for humans and Emory is perhaps building up for a larger part of the plot.

Cadmus is involved with both as an adversary to Maddox and Vincent’s uncle.

Editing and flow: The editing was excellent only one slight error which didn’t take away from the story and the flow was perfect. It was hard to put it down.

Conflict and Climax: Vincent’s fight to both sacrifice himself to save his people and retain his identity was the main part. He is going to be a powerful character with the struggle he put up. Maddox has an objective and needs Vincent for it to work, but first he has to regain his trust after the assault by Titus. The book is the first of a series so it ended in a cliffhanger (no prior warning given on retail outlet). The final scene was climactic and leads into the next book.

Formatting: Chapters and viewpoints were well laid out. The red and white theme going throughout the book.

Summary: This book was visually attractive and the story draws you in from the start. Has a very well laid out plot and characters I can’t wait for the next one. The storyline keeps you on the edge of your seat. If the final scene is any indication then this will be a must read series if you like intrigue and or vampires. This would have earned a perfect 10* apart from the lack of warnings of dark scenes (including male rape) and no note regarding cliffhanger ending.