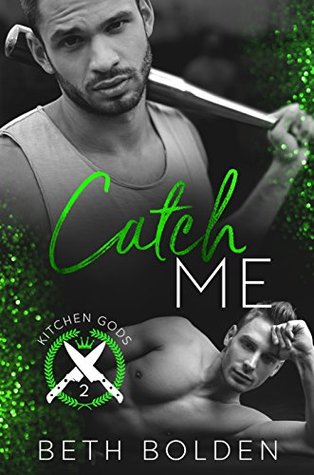 Cover Art:  It is a black and white cover with hints of green. There is a man holding a baseball bat (Ryan) at the top, and a man lying down shirtless (Wyatt) at the bottom. There are also two knives which lets the reader know it is book 2 of the Kitchen Gods Series. I believe this cover matches the feel of the book. Also, the title is perfect.

Synopsis: Ryan is a famous baseball player and needs a fake boyfriend to try and sway the Dodgers to re-sign him for the next year. Wyatt is a personal chef and is hired by Ryan to cook for him and to be the fake boyfriend. There are twists in this, like the fact that Ryan doesn’t tell Wyatt right away why he was hired. What happens when fake boyfrien feels a lot like real boyfriends?

Secondary Characters: Nana – Wyatt’s grandmother, he pays for her living at a facility, and is not out too. Eric – Ryan’s agent who is a pain in the butt. Tabitha – Ryan’s bestie who tells him like it is.

Flow and Continuity:  I liked the flow and thought it was really well thought out.

Editing and Formatting: I found very few errors and nothing that took away from the book. All chapters are noted and you can tell who’s POV it is told from, as the author uses both in the same chapter.

Conflict and Climax: Just when I thought it was over, something else happens. Ryan and Wyatt have some misunderstandings and I just wanted to yell at the guys to “talk to each other”. The final conflict could have gone differently and I am glad it stayed how it was. It all ended like how I expected it to.

Conclusion:  I loved this book. Ms. Bolden really captures the characters in such a way that you can’t help but fall in love with them. I was a little weary because fake boyfriends, but this book is so good. I also love the cooking aspect, it makes me want to try all the foods and hire my own personal Wyatt. I absolutely love the series and each book is a standalone.