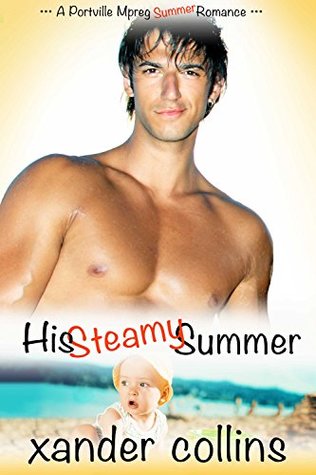 Cover Art: I liked the cover art because it fit the story. It provokes summer with the sandy beach. I like use of yellow and bright blue in the rendering of the beach scene. The adult model is attractive, and the baby has a shocked expression on its face. I did not like this baby as much as the other babies in past covers. My only complaint about the models was that it would have been nice to see the male holding the baby.

Synopsis: The author introduces the readers to the main characters and lets them see a bit of their background.

Main Characters: Alpha Brian and omega Nate are best friends reunited in their hometown after a few years apart. Nate reunites with his friend Brian after suffering an immense personal tragedy which led to him losing a body part. The friends have a real chemistry.

Secondary Characters: I liked Brian’s roommates and Nate’s friends. They were decent to them giving Nate and Brian support when needed.

Plot: This is a second chance romance that reunites two childhood friends and turns their friendship into love.

Writing Style: This story was short and sweet. The narrative was decent. The author got into the mind of the characters. I was able to feel Nate’s emotions in the words that the author wrote. The dialogue was also pretty good. The sexual scenes were not that many, but I did not expect a lot given the 30,000-word count. I think it was decent. Some of the regular scenes felt rushed because of the word count. I wish the author had either added words or deleted minor characters.

Conflict/Climax: Nate was badly injured in an accident that resulted in the death of both of his parents. Since then he has battled self-esteem issues and the trauma that resulted from losing his parents and most of the story deals with his struggles. Brian helps Nate giving him the love he needs to triumph.

Conclusion: I think that overall this story was an enjoyable read. Even though I liked most of parts of the book except for the ending. I felt that it was too rushed.

For all these reasons, I award this story 8 stars out of ten!