Beyond the Grave Review ~ Realistic Time Travel Romance … 8 out of 10! 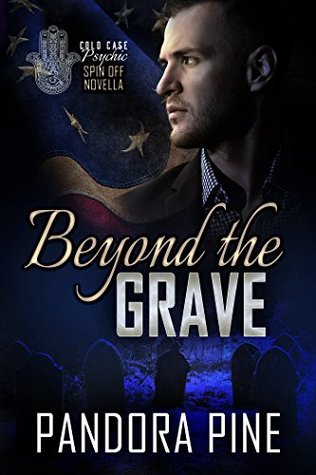 Cover Art: I think that this cover is beautiful. It is eerie. The main color is blue. There are several shades of blue in the art. The graves glow in electric blue. The American flag is in the shadows with an antique look to it. I loved the model. He almost looked like a solider from the eighteenth century except for his modern button-down shirt.

Main Characters: Harrison Kirkpatrick is a historian who researches Revolutionary War military figures. He is obsessed with one of the soldiers who happens to be named Gannon Chalmers.

Gannon Chalmers is a militiaman who is tasked with helping to defend the patriot position against the British Redcoats.

The main characters have a rocky introduction with each other. They do not know why the other is in their space. It is a bit confusing for both, but they soon come to an understanding. From the beginning, Harrison and Gannon have an instant attraction to each other. The heat between them explodes into passionate intimate scenes.

Minor Characters: These characters are mainly from Harrison’s workplace and Gannon’s fellow soldiers. They are supportive of Harrison and Gannon. The series’ usual main characters Ronan and Tennyson make cameo appearances.

Plot: This is a novella that deals with historical events, time travel and paranormal. It is different from Pandora Pine’s usual work, but I think she created an excellent romance with historical elements.

Writing Style: I liked the way this story was crafted. The narrative was fun to read. The author easily alternates between Harrison and Gannon’s points of view. I loved her ability to show the thoughts in her characters’ minds. I liked the dialogue because it is normal. Nothing overly flowery or stilted. The characters fight each other with their words at first. Harrison’s modern dialect confused Gannon.

I think that intimate scenes were well done. Pandora wrote nice sized scenes that were not too short or dragged out. They were sweet and intense at the same time. Harrison and Gannon were as passionate as they could be whilst also keeping their tryst secret.

Conclusion: I think that Pandora did a decent job of this story. She managed to create a realistic time travel romance within the word constraints of a novella.

For all these reasons, I award this an eight out of 10 stars!