The Panther’s Pretend Mate Review ~ Rounded characters, good world building and a great storyline … 9 out of 10! 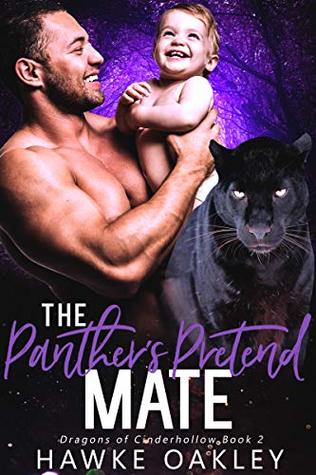 Cover Art: Laughing man, topless holding a baby to one side, the other side has a black panther facing outwards, Title a mixture of white upper case font and purple script across the bottom. An attractive cover.

Synopsis: Gives the outline of the story but doesn’t give too much away.

Plot: Panther omega needs a mate who can protect him so he can leave his village. The Alpha he chooses to be his fake mate is a dragon shifter who feels more for his panther than he should. Is it reciprocated?

Main Characters: Raja – a rare black panther omega who is overprotected by his family and needs an Alpha mate who will protect him. In desperation he puts his profile on a dating app..

Lorenzo – a dragon Alpha shifter who connects with Raja on the dating app.

Flow/Continuity: Easy to read, flowing from scene to scene.

Conflict & Climax: Raja wants to escape from under the control of his over protective parents. He thinks having a pretend mate will help him achieve this. His parents have a good reason for being protective which is revealed in the story.

Writing Style: Written in the first person, the story switches between Raja and Lorenzo’s POV.

Editing/Formatting: Chapters are headed in a nice large clear font with chapter number and character’s name. Very tidy formatting, no blank pages. This was a review copy but very clean. No major mistakes to take me out of the story.

Price: Reasonable for a book of this length from an established author.

Conclusion: A very well written MPreg story with rounded characters, good world building and a great storyline. It was good to read an MPreg with a believable birth scene. (Not a spoiler as there is a baby on the cover!!)