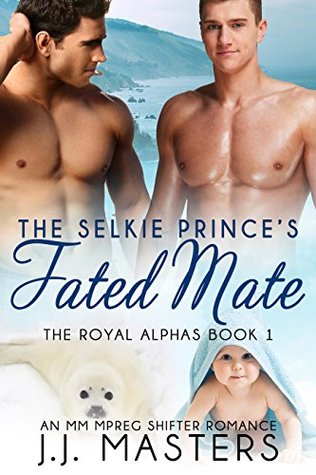 Cover Art: A nice cover with two handsome bare-chested men, a white seal and a baby. I liked the colors in the art. I think that the blue and white mixed well together.

Warning: The author warns the reader that this contains sexually explicit scenes and adult language. There is also a warning about trying new sexual positions.

Main Characters: Kai, a Selkie Prince and Alpha who is in need of a mate. He is first in line to his father, King Solomon’s throne. He is very sure of himself and a bit arrogant. He does not always like to follow tradition breaking the rules as he goes along.

Luca, an ordinary omega who is offered with a few others as a potential mate to the Selkie Prince. He does not act like an omega should. He is sassy, and he does not always act submissive.

The main characters are joined together in an arranged marriage. They have great chemistry with each other as mates. Their relationship is not perfect at first, but they share a devil may care attitude toward tradition which helps it get better. They bond, and they have a lot sex throughout the story.

Minor Characters: Kai’s younger brothers and his father King Solomon give the story its most comedic and stressful moments.

Plot: It is a shifter romance with a male pregnancy theme. The shifter type chosen is unique and the story is definitely not boring.

Conflict/Climax: Kai and Luca’s problems revolve around the need to produce an heir to the North Colony throne. Kai’s father, King Solomon, orders the newly mated couple to produce an alpha heir within six months or be separated forever.

Writing Style: I think that this story was decently written except for the dialogue which started out normally, but the author liked to repeat the following phrase “my alpha bull”. After the fifth time of it, I wanted to throw the book at the character and the writer. I can see that Luca would desire Kai but could not help but wish the author had chosen better words.

The most positive aspects of the author’s writing are the narrative and the sexual content. The narrative is very good. The author allows the reader a glimpse inside the main characters’ minds. I think that the sex scenes are also decently written. Kai and Luca have a lot of sex and the author does a good job creating those scenes.

Conclusion: I liked this story, but I would have loved had it not included the repeated phrase “my alpha bull”. I wavered as what to award this story but since the characters were good and the plot decent, I was more lenient in my scoring.

For all these reasons, I award this story a 7 out of 10 stars!