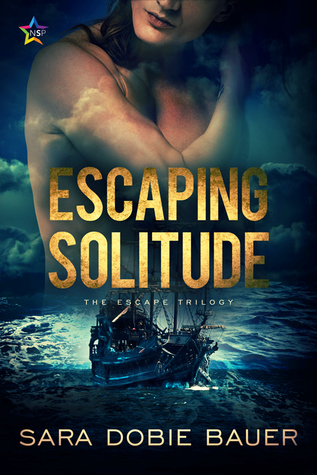 Cover art: It fits the story well. We see topless man and can only see his lower face, on the bottom part we see a ship. The title seems to be escaping in the middle and both title and author are clearly readable. Very well done, however it says trilogy without saying which part of a trilogy it is. It would be better if it said which book it was.

Synopsis: Picks up where the first book left off and continues the story without giving away all the good stuff. Just enough detail to get the reader’s attention.

Plot: The story is a continuation from book one, so reading in order will help. This one sees the characters home in New Orleans and seeking an elder. It is well written as we also see more of the relationship build up between the main characters.

Main Characters: Edmund is a British sailor who washed up on the shores of Andrew’s island exile after a shipwreck in book one. Andrew is a centuries old vampire who was exiled on an island as punishment. They both had personal growth as they reacclimated to society and each other.

Secondary Characters: Michelle is the head of the vampire coven who is both friend and mother image of sorts to Andrew.  Felipe is Andrew’s friend and another vampire in the coven. There is also Gabriel, who also goes by Gabriella, and Danys who also works there. May, the madam, is a friend of Andrew’s and becomes close to Edmund as well.

Flow/Continuity: Story flowed well with no gaps in continuity.

Conflict and climax: The major conflict in the story is Edmund’s humanity and Andrew’s concern with his adventurous nature which leads to danger. This continues until the end when they find what they seek.

Editing/formatting: There was a few missed words and one scene with a switch in clothing that was missed with the editing. The formatting was very well done.

Conclusion: This was a very well written vampire tale. I would recommend reading them in order though as this one picks up where the first one left off. Excellent writing and characters made it hard to put down and had a sense of excitement to it. The ending was powerful and built up anticipation for part three. If you liked Interview with a Vampire you will like this one.